Loganair under its own colours

Flying under its own colours for the first time in 25 years, Loganair, Scotland’s newly-designated national airline and the only carrier based north of the border, celebrated on Friday as it took to the skies.

The company for a quarter-century operated as a franchise partner – firstly for BA and latterly since 2008 for Flybe – with its aircraft wearing the livery of those two carriers.

Its re-emergence in its own right, under managing director Jonathan Hinkles, is the result of a £4m investment that Loganair says has secured 600 jobs throughout Scotland, including 160 at bases in the Highlands and Islands, and created 15 new posts.

The official inaugural flight, operated by a Saab 340 named  Spirit of Harris  and carrying Loganair's bold new tartan livery, flew into Glasgow, where the airline is headquartered, from Islay and was welcomed by a spectacular water cannon salute.

It was commanded by Captain Rebecca Simpson, who has been flying for 14 years and is one of the female pilots who make up 13% of Loganair's flight crew – more than double the average of other airlines. 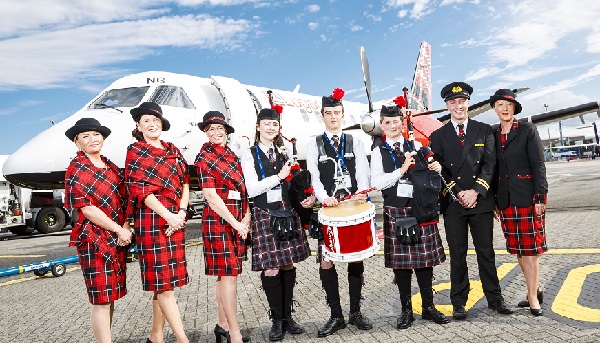