AND FINALLY: BCAL on stage

The spirit of British Caledonian Airways reigned supreme again, Laurie Price writes, when a full house at the Capitol Theatre in Horsham for a Beach Boys tribute concert were treated to the first ever live performance of the 1980s BCAL advertisement theme Caledonian Girls.

The song was included in recognition of Horsham as the home of many former BCAL staff. Former BCAL air hostesses Paula Comber and Lyn Povey in their distinctive tartan uniforms joined the Beach Boyz Band on stage during the performance, which was also watched by some 60 former staff of the airline plus families and friends.

Former senior BCAL marketing manager Richard Heywood, who had helped to put the BCAL slant on the evening, said: “It was great to hear the  Caledonian Girls  lyric live for the first time and see the tartan uniforms on stage.

“It is a testament to the enduring spirit and ethos of the BCAL brand that so many former BCAL staff came to support the evening, which was enjoyed by all”.

Some of the proceeds from the event were for the  Golden Lion Children’s Charity,  founded by BCAL in the 1970s, with donors being thanked by Lynda Guy from the organisation for their generosity.

For those who missed the concert, the band will be at Camberley on 16 September and Epsom on 26 January.

Prior to the Camberley concert, it is hoped to photograph the band with the BCAL-branded Piper Archer, G-RECW, resplendent in its airline livery, at its base at Blackbushe Airport (BTN 30 January). 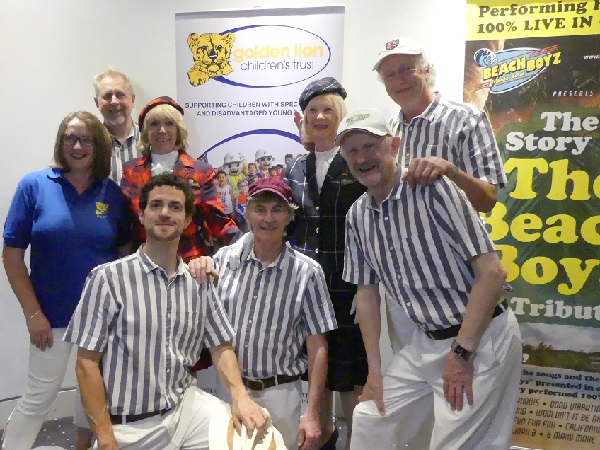