Al Baker to head up IATA

Qatar Airways Group chief executive Akbar Al Baker has been elected chairman of the board of governors of the International Air Transport Association (IATA), effective from June 2018. 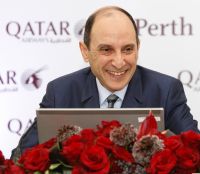 Al Baker said: "For more than two decades, I have lived and breathed aviation, and I look forward to working alongside the board of governors to champion passenger rights and improve security standards across the industry, as well as continuing to promote the rights of freedom of flight for all."

IATA represents some 275 airlines comprising 83% of global air traffic. The election of the sometimes-controversial Al Baker to this prestigious post is a clear recognition of the leading role that he plays in a dynamic and highly-competitive industry.

He is one of the most recognisable figures in international aviation, always keen to support personally the introduction of new routes. His vision and commitment have enabled the development of Qatar Airways from a small regional carrier into a major global airline in a span of just 20 years.

Mr Al Baker caused consternation at an IATA AGM five or six years ago when he made the forcibly strident comment how smaller airlines were underrepresented or ignored and how IATA was a club for big airlines. It'll be interesting to see if he's allowed to increase representation of smaller airlines and give these carriers more of a voice in the IATA hierarchy