UK border security was called into question last week in an unexpected intervention by British Airways, which said “serious inefficiencies” were causing residents and visitors to endure long queues and frustrating delays on arrival at airports. 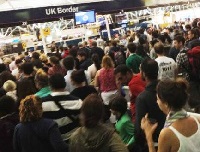 In a submission to the Home Office, the airline raised concerns about the performance of the UK Border Force – adding that with Brexit “just round the corner”, the UK needed more than ever to show it was an easy place to travel to.

BA noted that when eGates at Heathrow Terminal 5 were launched in 2015, the Home Office said such automated technology meant Border Force could process a higher number of low-risk passengers more quickly and using less resource.

But, the airline added, routinely at T5 only one third of the 29 eGates were open and usually shut prematurely at 23:00 while passengers were still making their way off flights, causing “massive queues and frustrating delays”.

BA director of Heathrow Ragbhir S Pattar said: "We recognise some of the steps being taken by Border Force to improve the service they provide. However more focus must be put on operating in the most efficient and flexible way and ensuring passengers' needs are put first.”