An Airlink Embraer E190-100 departed St Helena Airport on Tuesday afternoon after carrying out a successful proving flight to the island from its base in Johannesburg and completing a series of flight trials.

The visit, part of the preparations for introducing an air service on a new route, involved a two-day programme covering training and audits at the airport as well as various discussions with key stakeholders on the island.

The Airlink aircraft, with 34 passengers headed by CEO Rodger Foster, landed on Runway 20 at the airport after a 6hr journey from Johannesburg which incorporated a fuelling stop in Windhoek, Namibia.

Guests were welcomed later at a reception at Plantation House by St Helena governor Lisa Phillips. She said:  “I hope we will have proven to the South African Civil Aviation Authority that the airport operation is technically very capable and also what a special place St Helena is.”

Details of fares and a start date for regular flights to the island are expected to be announced soon. 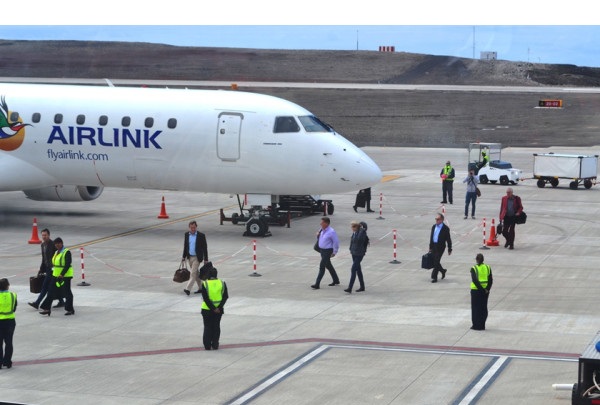 "landed on Runway 20 at the airport after a 6hr journey from Johannesburg" Runway 20!!! Are you having a gentle kid?

I am happy for the Saints. It would be nice if they could keep their mail ship as well; but of course they won't be allowed to. And no-one should underestimate the operational planning that will have to go into every departure to and from such a remote island, so it'll never become a high-yield or high-volume route, but what an adventure! Who knows where this will lead?