More competition for airlines on short-haul European routes is on the way from Eurostar with the release of more than 44,500 seats from £29 one-way in a new promotion starting tomorrow, 29 August, and running for 14 days to 11 September. 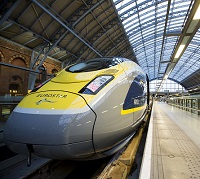 Passengers will be able to travel on important business routes to Paris, Lille, Brussels and any Belgian station between 28 September and 9 December and to Lyon, Avignon and Marseille between 3 September and 4 November.

The promotion is an extra challenge for the likes of British Airways, which has restarted Paris flights from London City Airport, with Eurostar also pushing its Standard Premier class travel to the French capital for £70 one way.

Benefits for passengers in Standard Premier include more spacious surroundings and a light meal served at the seat. Lille, Calais and Brussels are also offered at the £70 fare or travel to any Belgian station is £79 one way.

I find its website difficult to use. Try putting in Ashford International and you get" Cannot find any matches for this station..."! Are they trying to kill off this Ł80mn (taxpayer funded) terminal now that it is down to two or three weekday services?