Nearly 30 new routes are on the cards from Alaska Airlines between now and the end of 2017 as the company kicks off what it is calling the most significant network expansion in its 85-year history. 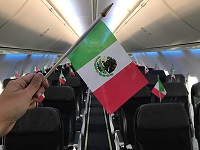 The programme began earlier this month with the start of service to Benito Juarez International Airport in Mexico City from two major California hubs, San Francisco and Los Angeles.

The airline is also about to add service from San Diego International Airport to Mexico City, becoming the only airline to serve the Mexican capital from all three California gateways.

The new service from San Francisco was marked by a Mexico-style send-off for guests on board the airline’s inaugural flight, including a live mariachi band, churros and traditional Mexican drinks.

Mexico City is the ninth destination in the country served by Alaska from California. The others are Cancun, Ixtapa/Zihuatanejo, Loreto, Los Cabos, Manzanillo, Mazatlán, Puerto Vallarta and Guadalajara.

Alaska began flying to Mexico in 1988 and now operates 100-plus flights a week, more than any other US carrier from California. Alaska previously served Mexico City from 2005 to 2015.