Airlines out of favour

High-profile incidents in the aviation industry such as the British Airways IT meltdown earlier this year and the treatment of a passenger on board United Airlines have caused a steep decline in the way carriers are regarded, according to a study. 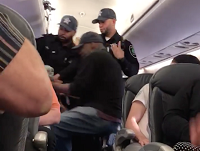 Engine Service Design, which advises companies on improving customer satisfaction, surveyed 1,025 adults online, asking them to name the three sectors from a list of 14 with the worst service.

Results showed airlines, broadband and insurance were the three groups that experienced the steepest decline in customer service perception over the past year, with the aviation industry suffering most.

In a similar survey in 2016, air travel was named by only 12.8% of respondents, with only hotels and hospitality (8.8%) and technology (12.4%) on lower numbers but the airline sector now features among the top three for 17.1% of respondents.

ESD co-founder Joe Heapy said the results suggested the airline sector had “done more than any other industry to damage its reputation in the past year”.

“It wasn’t just that the incidents were bad – arguably it was their response that caused as much anger, particularly in BA’s case,” he added.

“In an era of rampant cost-cutting, their actions and reactions can give the impression people are more akin to cargo than passengers.”

Aviation is going through some though times and the new "style of "nickel and dime" passengers is not helping. The shabby service, or lack of it that airlines are now providing only serves to alienate passengers. The new breed of managers fancy themselves as "acute business geniuses" but they may fail to understand that a different type of management is required in this new business era, one that realizes that responsibility begin, rather than end, when the passengers boards the aircraft. In business there is nothing more fatal than cunning management".