A scheme introduced to help business travellers from non-EU countries to fast track journeys through UK airports is being extended to families to ease queues which have been building this summer because of enhanced security procedures. 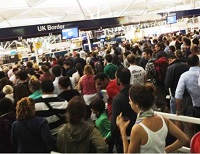 The Registered Traveller Service (RTS), which costs £70 a year, allows passport holders from non-EU countries such as the US, Australia, Canada, New Zealand and Singapore to bypass bottlenecks by using ePassport gates or the EU passport lane.

So far only signed-up adults could use it but it will now be extended later this month to include children. In another move to cut queues, there is also a plan to scrap landing cards, although non-EU passengers will still be checked against watch lists.

Immigration minister Brandon Lewis told yesterday’s Sunday Times the development of technology and eGates offered the opportunity to reduce waiting times while “technology is moving so fast there are huge opportunities to improve security and flexibility at the border as well.”

Meanwhile, new border control gates for travellers with biometric passports or Irish passport cards are being introduced at Dublin Airport to speed up immigration queues there and the Japan Justice Ministry has announced a plan for a new type of unmanned gate at airports to fast-track Japanese passengers.

I think the problem of time leaving is much worse. They should learn by the USA and introduce expedited security for registered travelers.