The first Mid-East carrier to take delivery of the Boeing B737 MAX 8 stepped forward last week when flydubai became the owner of the first of 75 of the advanced single-aisle aircraft it is adding to its fleet. 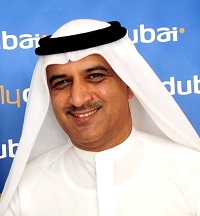 CEO Ghaith Al Ghaith said: “We are delighted to receive our first Boeing 737 MAX 8 aircraft from our order made at the Dubai Airshow in 2013, the largest single-aisle Boeing aircraft order placed in the Middle East."

The airline currently operates a fleet of 58 Next-Generation 737-800s and has built a network of more than 95 destinations in 44 countries, from Russia in the north, the Czech Republic in the west, Thailand in the east and Tanzania in the south.

Boeing Commercial Airplanes president and CEO Kevin McAllister added: “Flydubai’s growth in just nine years has been remarkable. Boeing is honoured to have been part of this, and this delivery marks another significant milestone in our partnership.”