A bold new look with tartan tails for the aircraft and original tartan uniforms for cabin crew and ground staff was revealed last week by Loganair as it also reported a boost in passenger numbers for July at a record 80,000, 18% up on last year.

The airline has adopted the new image as it resumes flying under its own name on 1 September after 23 years of operating under franchise agreements with other carriers.

The first passenger aircraft with the new Loganair black, red and white colours – a Saab 340B named Spirit of Caithness – is now operating around the airline’s network in Scotland. Another 15 aircraft are being repainted.

The Loganair tartan, entry 11,744 on the official Scottish Register, has also been incorporated in new uniforms for all Loganair staff, including engineers and cabin and ground crews.

Managing director Jonathan Hinkles said: “The bold image means we will immediately be recognised as Scotland’s Airline wherever we fly, whether we’re landing in Manchester, Bergen or the Outer Hebrides.”

Hinkles added: “Our July passenger figures are a clear sign our efforts to provide more seats, more flights and more low fares than ever before have been well received.” 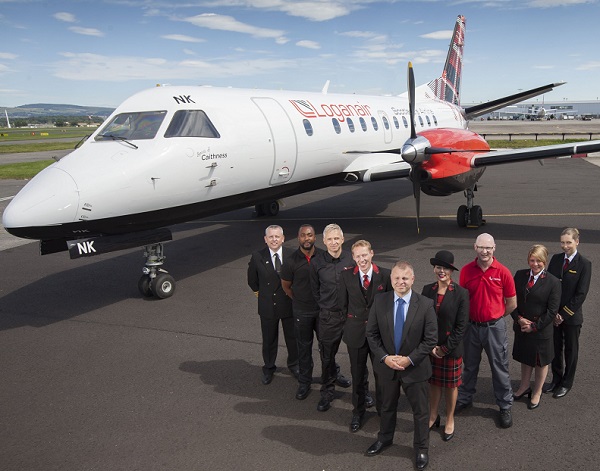