A 10-year £1bn private investment programme that will see the creation of a “super-terminal” at Manchester Airport was unveiled last week. Officials say it will deliver a "major boost" to the UK’s growth prospects and international competitiveness.

The project, the largest private investment in the region, is designed to reinforce the airport’s standing as the UK’s global hub in the north of England, enabling better and more international connections and supporting economic growth across the area.

Backers of the Manchester Airport Transformation Programme (MAN-TP) say it will provide millions of passengers and airlines with facilities that combine state-of-the-art services with excellent customer service.

With the new development complete, the airport, which is owned by the Manchester Airports Group (MAG), will be able to grow alongside a thriving northern economy to handle 45m passengers a year, an increase of almost 20m compared to today.

MAG CEO Charlie Cornish said: “Manchester is already among the world’s top 15 airports best connected by destinations, the only one outside London to offer direct routes to long-haul destinations like Beijing, San Francisco, Houston and Muscat.

“MAN-TP will enable further improvement in this and we are currently targeting an expansion of the route network into North America, the Gulf, Asia, Africa and Latin America.” 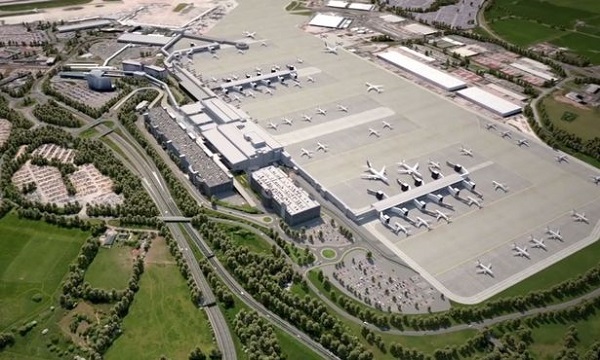 I’m not sure exactly what Grayling said that we didn’t already know, GBŁ1 billion expansion, making T1 redundant, etc., that’s been ‘news’ for over a year. What he did do was the politician’s trick of burying bad news, i.e. that the electrification of the Leeds-Manchester line would be ‘modified’, under this regurgitated announcement. Didn’t MAG see that coming? I suppose that counts as a version of fake news. As for the design of this extension it looks to me like the same old bland effort we’ve seen before at Manchester. If you’re spending a billion quid at least pay an architect to make it look pretty. “Good enough for government work” no longer applies at an airport serving a city that has global ambitions.