Norwegian honour for US icon

Inventor and statesman Benjamin Franklin is to be the first American tailfin hero to be honoured by Norwegian as the airline prepares for a big increase in flights between Europe and the US this summer. 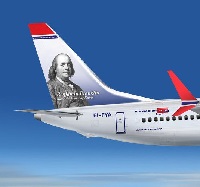 Franklin was often called the “first American” because of his tireless campaigning to unify the colonies. His image will adorn Norwegian’s newest Boeing 737 MAX 8 which is about to make its maiden voyage from Boeing in Seattle to Oslo.

Norwegian has a tradition of celebrating iconic, historical figures on the tails of its aircraft, with each one featured embodying what the airline calls the spirit of pushing boundaries, inspiring others and challenging the status quo.

Norwegian plans to introduce a series of US icons over the next few months to mark its expansion in the US, from where it now offers 57 transatlantic routes from 15 airports to Denmark, France, Ireland, Norway, Spain, Sweden and the UK and six routes to the French Caribbean.

Chief commercial officer Thomas Ramdahl said: “It is an honour to recognise an American founder on one of our aircraft and this gesture also symbolises all the great things we have planned for Norwegian in the US.”