Thirty years of operating to the UK were marked by Emirates last week with an announcement that the airline is on track to carry 5m passengers between Britain and Dubai in the 2017/18 financial year, making it a record year for the airline. 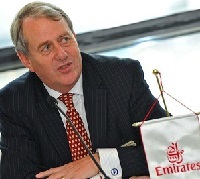 Emirates launched service to Gatwick on 6 July 1987 with the Airbus A310. It carried just 87,000 passengers in its first year and had only six aircraft in its entire fleet, offering UK passengers onward connections to six other destinations.

The airline says its relationship with the UK extends beyond offering flights to the country as it employs 3,543 people from the UK including 1,892 cabin crew and 622 flight crew.

Emirates has also continuously upgraded its fleet and currently operates the Airbus A380 on all six daily flights from Heathrow, all three from Gatwick and Manchester and one of its three services from Birmingham. Other flights use the Boeing B777.