Aviation chief on the future

The government remains committed to delivering expansion at Heathrow and parliamentary support should be secured before any discussions on a new runway at Gatwick or another South East airport begin in earnest. 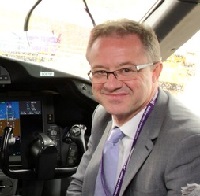 These were among points made by Civil Aviation Authority chief executive Andrew Haines at an Airlines UK policy seminar last week as he dismissed suggestions following the general election that support for expansion might be on the wane.

“If you were to look optimistically, you would say at least we have the potential for a five-year parliament, which could actually mean we get through the planning process. It is possible for Heathrow to have full planning consent by 2021,” he added.

On the issue of expanding Gatwick or Stansted, he said “this should wait until we’ve even got progress on the parliamentary arithmetic of a new runway at Heathrow. Politically, getting expansion done in this country is tough.”

Haines said further progress was needed on discussions between Heathrow and UK and foreign airlines. “It’s hard to row back from what the airlines have been saying on affordability,” he said.