A firm order for 20 new Airbus A320neo aircraft to modernise the short- and medium-haul fleet was announced last week by Iberia chairman and CEO Luis Gallego at a meeting of small business groups held to mark the airline’s 90th anniversary. 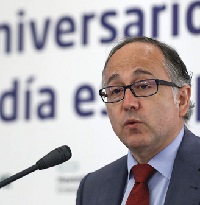 The aircraft are due to be delivered over a three-year period from the first half of next year. They have a book value of $1.84bn, but Iberia parent company IAG is reported to have negotiated a significant reduction.

The order complements Iberia’s long-haul fleet modernisation programme begun in 2013, under which 39 new aircraft will join the airline, also by the end of 2021, including 16 new-generation Airbus A350-900s, with the first expected next year.

Gallego also announced the reorganised Madrid – Barcelona walk-on air shuttle service, known as the Puente Aéreo, or air bridge, will be launched on 19 July, with enhanced benefits for passengers including the right to change or cancel reservations.

Shuttle passengers will continue to use dedicated facilities in both Madrid and Barcelona airports with 15min check-in, while innovations include more flight options with passengers able to fly on both Iberia and Vueling flights between the cities as well as shuttle flights.