Fast-moving political events including last week’s protests following the Grenfell Tower fire and plots against Theresa May promise to make the Aviation Club UK’s next lunch even more topical than usual. 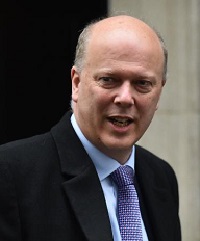 Guest speaker is secretary of state for transport Chris Grayling, whose public row with Labour’s John McDonnell over the Grenfell action put him squarely back in the spotlight.

In addition, his views on his priorities for aviation will also be eagerly anticipated, given that by the time he addresses the club on 12 July he will have been in post at the transport department for almost a year and the Brexit negotiations are under way.

Aviation Club chairman Jane Johnston said: “The club has a reputation for attracting high-calibre speakers to our lunches and we are honoured ours was one of the first diary commitments to be confirmed since the secretary of state’s reconfirmation of post.”

The lunch, to be held at the Institute of Directors in London, will be followed on 20 July by the club’s Annual Reception, which will be held this year in the Peers’ Dining Room in the House of Lords.