Further details of the link-up between Flybe and Eastern Airlines were announced last week with the signing of a Heads of Terms agreement for a new alliance following Flybe’s decision to end its franchise agreement with Loganair (BTN last week). 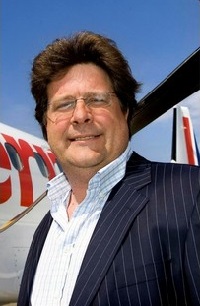 Flybe says the signing is the first step towards finalising a five-year franchise deal with Eastern operating its scheduled route network under the Flybe brand and agreeing a joint revenue and risk sharing agreement.

This will cover four Eastern aircraft to fly existing Flybe branded routes from Aberdeen, Edinburgh, Glasgow and Manchester. The four aircraft will operate under the Flybe franchise and “significantly improve connectivity for Scotland”.

Its scheduled network, including routes from these airports, will be available to book on flybe.com from 1 September.

Flybe CEO Christine Ourmières-Widener said: “This alliance is an excellent opportunity to strengthen the Flybe network. We already operate flights at several common airports and this will enable passengers to connect to a greater number of destinations, across the UK and into Europe, all booked through the Flybe website.”