In a move against which HS2 pales into insignificance, investors behind the Hyperloop One transport system have unveiled their first shortlist of possible routes, including London – Edinburgh, which they say could be covered in 50min.

The project is the brainchild of the international businessman, inventor and engineer Elon Musk. It uses electric-driven pods travelling by magnetic levitation through reduced air pressure tubes at 600mph.

A working test track has already been constructed in the US as a first step toward a European network which would include three UK routes. As well as London – Edinburgh, these are Cardiff – Glasgow and a “Northern Arc” between Glasgow and Liverpool.

This would include stops in Edinburgh, Newcastle, Leeds and Manchester and take 47min in total. Cardiff – Glasgow would take 89min, while a London – Birmingham link would have a journey time of 14min.

The UK routes are part of a wider discussion about multiple routes being built across Europe. The company says it hopes to have 500 employees in place by the end of the year working on “bringing the technology to life”.

If all the proposed routes were to go ahead, Hyperloop says the system would connect 44 cities and more than 75m people across Europe. 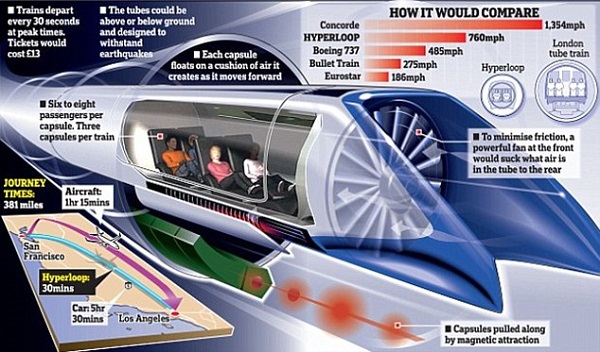 He is a dreamer. I don't know how many of his ideas are workable.