Complete with camera, John Burke attended a leading opportunity for hosted buyers to meet the representatives of resorts and venues worldwide. 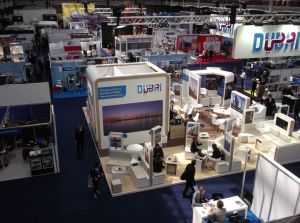 More than 700 event organisations and destinations were represented at London’s fifth Meetings Show held at Olympia Grand last week. Among them were 47 newcomers, including Butlins Conference, going upmarket, and Farnborough opening a 20,000 sq ft Congress Hall next Spring.

Destinations making their debut ranged from Bath and Blackpool to Milan and Malaysia, and the number of convention bureaux or tourist offices was 105, three-quarters of them abroad. Italy and Scandinavia were well represented, but not the Benelux.

The show’s catalogue usefully divided venues into four types that included 12 academic ones, five historic centres and 19 sports grounds – all them in Britain. Allowing for overlap, the general exhibition and conferences centres totalled 67, half of them located as far afield as Turkey and Brazil.

GL Events alone boasts access to a network of 40 sites at 23 destinations in seven countries. The French company’s spokeswoman, Natalia Agrel, said: “This time around, we are promoting our new London sales office.” 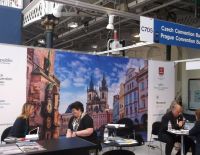 Statistically, the show was dominated by the accommodation sector, which also helped the organisers to claim that it covered 50 countries – not least in the Middle East and the Americas. The grand total was 215 establishments, including individual ones such as Trump Turnberry in Ayrshire and Zafiro Palace in Majorca.

With almost half of the hotels belonging to 30 chains, Hilton and Ritz-Carlton led the field with 11 local sales managers each. Three Novotels exhibited, but only a single InterContinental, although there were also two Holiday Inns from the same group. Wyndham Hotels promoted its rewards systems across 16 brands.

Germany’s largest chain, Maritim, emphasised its green initiatives amid upgrading, while QHotels marketed its 26 four-star properties. Curiously, amid all the luxurious offers, Lapland offered safaris while Visit Scotland was promoting survival courses in the Hebrides for corporate bonding. It was among 14 Scottish exhibitors, while nine represented Wales which complained of getting only 2% of conference business in the UK.

Five airlines exhibited and so did Carey Worldwide Chauffered Services, based near Heathrow, but no cruise lines were seen. The presence of Virgin Trains East Coast was explained by Janine Sykes: “Many hotels and venues are on our routes.”

There were 23 providers of ancillary products, such as Conference Badges of Teddington, with clients worldwide, and London-based Guidebook that puts events on mobiles. Meetings services firms totalled 28, but Arc International and Moulden Marketing were the only professional congress organisers.

There was more to it than the exhibitors themselves. The event’s director, Stephen Knight, told me: “Our networking once again took the show beyond Olympia to create a full week of opportunities to mingle with industrial peers, starting with the pre-show reception for hosted buyers and concluding with several post-show familiarising trips around Britain and the continent.”

The venue itself saw a programme of professional education comprised of 57 lectures under seven headings, ranging from marketing to technology, and the list of speakers included past directors of Walt Disney and Coca-Cola. The most ominous talks were entitled ‘Are conferences committing suicide?' and 'Has progress slowed us down?' although safety, security and insurance also loomed large. Olympia itself has sniffer-dogs and discreet surveillance.

Significantly, several exhibitors admitted that the current nervousness was slowing down bookings, but Nadine Mifsud of Malta said: “We are seen as a safe destination.” Samantha Martin from Yarnfield Park, which attracted 60,000 delegates last year, said: “Many companies have still booked to see us here.”

In fact, the programme boasted of being Britain’s biggest opportunity for hosted buyers, although it is not clear whether last year’s total of 900 was matched.  However, the number of scheduled appointments with venues and suppliers apparently rose from 11,500 to 12,000.

In addition, the show featured informal face-to-face meetings with a dozen experts, some of whom were among the 18 members of the Meetings Show’s advisory board. For example, its chairman, Paul Kennedy MBE, gave advice about integrated solutions, while Paul Bridle from Excellence Squared discussed safe venues.

They also attended the linked Association Meetings Conference that drew 110 participants – this year to the Barbican – at the start of the week. Both events were supported by 17 trade organisations.

Meetings Show is managed by Centaur Media, the organiser of the annual Business Travel Show.