A final deal was announced on Saturday for Boeing to supply Iran’s third-largest carrier, Aseman Airlines, with 30 B737 MAX jets with another 30 following delivery of the first batch.

The deal followed a year of talks between the two companies and was sealed with a handshake between Aseman managing director Hossein A’laei and Boeing sales representative in the Middle East and Russia James Larson.

The deal for 60 aircraft is said to be worth $3bn according to local news reports, with Aseman paying 5% and the remaining 95% to be financed by Boeing. Deliveries are due to start in 2022 with all the first batch handed over within two years.

Observers noted that while one B737 MAX costs around $100m at current prices, carriers can usually negotiate a 50% discount in the case of large contracts such as this one.

The new agreement supplements the $16.6bn deal Boeing signed with Iran during the Obama administration in the US for the sale of 80 aircraft to the country’s flag carrier IranAir.

Earlier this year, Iran signed a deal with Airbus to buy 118 passenger jets for an estimated €22.8bn (US$25bn). 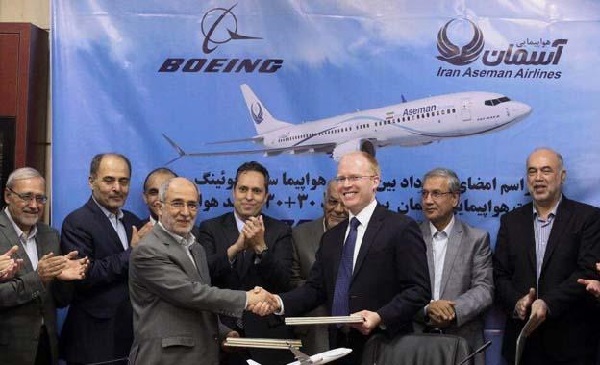