The 10th and final Airbus A380 superjumbo to join the Etihad Airways fleet was handed over last week, shortly after the airline announced Paris is joining London, Sydney and New York from 1 July as a year-round A380 destination.

Etihad and Airbus staff gathered at the manufacturer’s Finkenwerder plant in Hamburg for the hand-over ceremony before the aircraft left on its delivery flight to Abu Dhabi.

Etihad’s award-winning A380s are the most customised aircraft of their kind in commercial service, with features like the Residence, a three-room living space for up to two guests, including a living room, a private shower-room, and a bedroom.

The aircraft also boasts nine First Apartments, 70 Business Studios and 415 Economy Smart Seats, plus a Lobby lounge between First and Business Class with sofas and a bar.

On the Paris route, the 496-seat A380 will operate one of the two daily services from Abu Dhabi in an upgrade from a 328-seat Boeing B777 to meet demand. The airline says the move will also support strong connecting traffic.

Etihad CEO Peter Baumgartner said: “Paris is one of our best performing European routes, so the deployment will provide benefits to passengers across the network.” 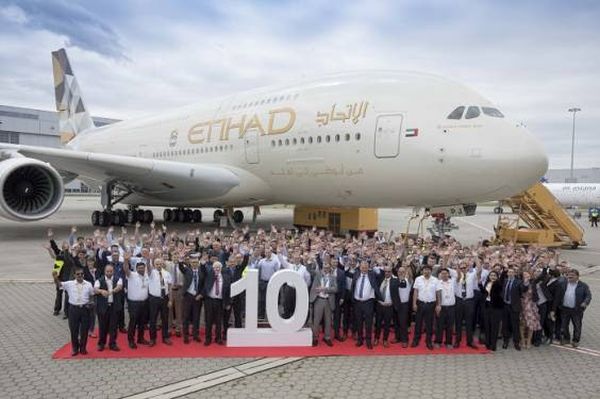