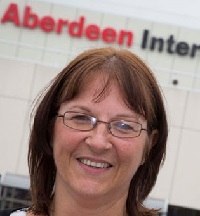 Part of a three-year project to transform more than 90% of the terminal, the extension is the first element to open to the public. It will be followed next month by a revamped domestic arrivals baggage reclaim and new Customs area.

Benzie said: “The extension will remove all the congestion at the airport and allow us to operate all the flights starting this year that use the new bigger aircraft. People were feeling they were crammed into a smaller space and this will stop that.”

Next month’s developments will also see the opening of Aberdeen Airport’s new Northern Lights executive lounge, offering views of the runway and featuring a “whisky hall”.

The facility will be managed by the Compass Group, which runs similar facilities at Heathrow, Birmingham, Stansted and Southampton.