For the first time in a decade, British Airways colours flew at Birmingham Airport on Saturday as flight BA7025 took off for Florence. It was the first of four new regional routes launched from the Midlands by the airline at the weekend.

Birmingham Airport ensured there was a party atmosphere for the first flight by celebrating with a giant cake showcasing the new destinations, which also include Malaga, Ibiza and Palma.

BA last flew from Birmingham in 2007 when the regional airline business was sold to Flybe, although Vueling and Iberia Express, subsidiaries of BA’s parent company International Airlines Group (IAG), started services and Aer Lingus has continued to operate to Dublin since 1984.

Flights are operated at weekends by Embraer 190 jets, with Eurotraveller and Club cabins and two abreast seating to give all passengers an aisle or window seat.

BA CEO and chairman Alex Cruz said: “We are continuing our regional growth following the successful launch of services from Stansted last year and now we are flying from Birmingham again we are excited about the future opportunities.”

Birmingham Airport CEO Paul Kehoe added: “Saturday was a momentous day for us. To see the BA tailfin on the ground after 10 years is great news for the region.” 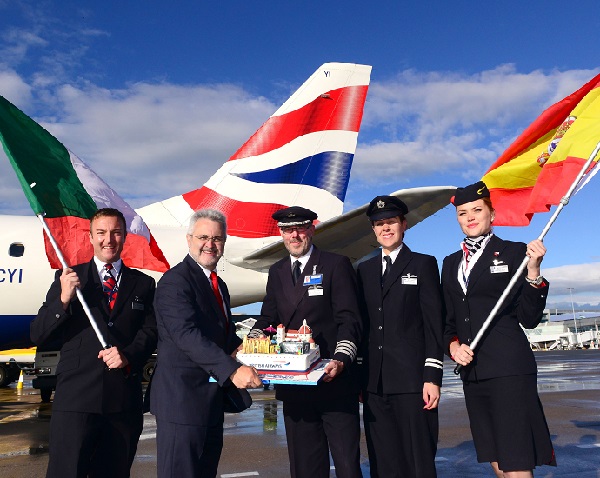