Larger aircraft with lower seat costs are on the way at easyJet after the airline last week reported a bigger loss than expected for the first half of the year of £212m compared with a £21m loss for the equivalent period in 2016. 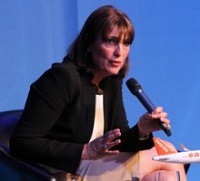 Chief executive Carolyn McCall said the company had arranged to convert part of an Airbus order to larger models, and was also postponing some orders of smaller aircraft.

She noted commercial pressures were easing as shown by  rival airlines holding back on growth in some easyJet markets, while bookings for the summer were up on last year “showing that demand to fly remains strong".

McCall blamed the first-half loss on fluctuations in the currency market, which she said cost the airline £82m, and the timing of Easter this year, which fell in the second half.

She claimed the first-half loss was in line with market expectations and the company was “comfortable” with the market consensus for full year pretax profit of £367m.