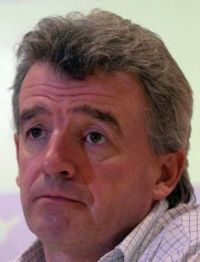 RYANAIR has posted an 80% rise in first-half profits to €387m (£347) and says it could reverse its long-standing strategy of rapid growth and distribute cash to shareholders instead if negotiations with Boeing for 200 aircraft, partly for expansion and partly to replace older planes, fail.  The announcement has had a negative effect on shares and after a little burst they are now at €2.88 (with a 12-month low of €2.40) well down on the 52 week high of €3.88 and about half of the best ever.  The airline claims to still be winning business from the three major European carriers, clearly passengers not put off by the need to often use out of the way and often less sophisticated airports. www.ryanair.com