A new consumer row is brewing in the US after American Airlines said it was cutting seat pitch on some aircraft from 31in to 29in, which observers noted is less than the low-cost carriers JetBlue in the US and Ireland’s Ryanair. 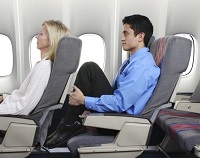 American says it plans to add more seats on its new Boeing B737 MAX fleet, to 172 compared to 160 on the current B737-800s, meaning pitch will decrease from 31in to 29in on three rows in Economy Class and to 30in in the rest of the main cabin.

The changes mean seat pitch on the aircraft involved will be almost the same as on low-cost carriers Spirit and Frontier, both of which operate with the minimum recommended measurement of 28in.

In comparison, Economy Class on Delta and United ranges from 30in-31in pitch  while JetBlue, Southwest Airlines and Alaska Airlines offer between 31in and 33in. Air Canada boasts up to 35in in Economy Class.

I hate to see ABTN succumb to the trend towards sensationalist headlines. No evidence is given in your commentary on American Airlines' seat pitch of a Consumer Row. Maybe you can stir one up, but I kind of doubt it since it actually only applies to three rows of seats, one of which is usually set aside for crew rest or employees traveling on non-revenue space available tickets.