Fifteen routes across Europe where catching a train is quicker and more environmentally friendly than flying have been identified by travel platform GoEuro in a move to dispel the myth that flying is always faster. 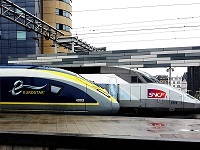 The company looked at popular European routes and found the top 15 fastest routes to travel by rail when taking into account city transit, security processes and travel times.

Among the 15 routes in Europe that showed up faster by train are Brussels to London, London to Leeds, London to Manchester, London to Paris, and Manchester to Edinburgh.

GoEuro CEO Naren Shaam commented: “We have been conditioned to think a 1hr flight, is just that; we forget the journey includes the time to get to the airport and the 2hr advised to clear security.”

Within the UK, London to Manchester is the most time efficient and environmentally route surveyed, where travellers can save 1:21hrs on their journey time as well as a total of 109.6kg in carbon dioxide emissions.

Paris to Frankfurt by train is definitely a pleasure, from arrival in the station to the German high-speed train with meal service at your seat. A departure just after 1 pm from Paris's Gare de lest gets you into Frankfurt's Hauptbahnhof before 5. The train has Wifi service, at least in Germany. (France, wake up?) It used to take eight hours for this trip. Never again a flight to Frankfurt from Paris.