In the same week China’s C919 made its maiden flight (see this issue), Russia entered the new-generation twin-engine fray with Izvestia reporting the MC-21 jet had left the assembly line at the Irkutsk aviation plant and was being prepared for its own first outing.

Developed by the Irkut Division of the United Aircraft Corporation (UAC) group, the MC-21 is claimed to be faster and cheaper than the Boeing B737 and Airbus A320. The test flight is scheduled for this month.

The twin-engine short- to medium-range airliner has a capacity of 150–212 passengers and as well as competing with the A320 and B737 MAX is intended to replace remaining Soviet-era aircraft such as the Yak-42 and Tu-134 and Tu-154s.

Russia’s largest carrier Aeroflot will be the first operator of the MC-21, with deliveries expected to start late next year but the UAC also wants to sell the jet to countries that have bought Russian jets  in the last, including China, South-East Asia and Latin America.

The MC-21 is said to have a cruising speed of 870km per hour, against competitors’ 828-842kph and will cost up to $85m, a significantly lower list price than its challengers. 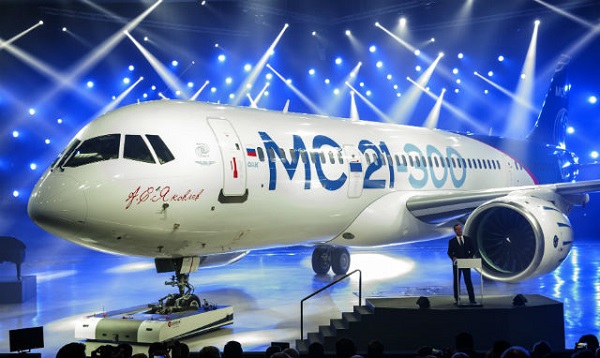