To many of a younger generation, McLaren means either a seemingly failed Formula One team or an illustrious road car beyond the dreams of most of us. Few will know that the name recalls one of New Zealand’s most treasured sons, born in 1937 and killed on the Goodwood motor racing circuit on 2 June 1970. 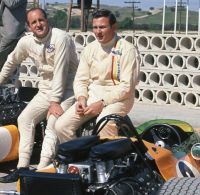 During his lifetime, he founded a company which won the Le Mans 24-hour race, Can Am and, since his untimely death, 12 drivers' championships and eight constructors' championships. Today, McLaren Automotive combines motor sport with low-volume production of some of the world’s most exotic road going cars.

On general release from 25 May and on DVD and digital download from May 29th, “McLaren” tells the story of the son of a garage proprietor from  New Zealand with a special aptitude for both driving and engineering.

Not to be likened with Senna, an emotional masterpiece said to be too “Hollywood”, McLaren is a fine pure documentary of one man’s pioneering spirit, unswerving tenacity and endless passion.

The film features contributions from his friends and contemporaries Chris Amon and Denny Hulme, plus Emerson Fittipaldi, Mario Andretti, Dan Gurney and Sir Jackie Stewart, with unprecedented access to the McLaren family and archives. Featured is the late Eoin Young, a motor racing journalist and chronicler of McLaren achievements.

The article doesn't mention what a great F1 driver he was. Twice third in the World Championship at the time of the Hills and Stewarts, he had a Monaco GP win to his name - in the cars of those days, mug drivers simply didn't win on that circuit.