It’s the norm to find out what passengers on certain airlines can look forward to in terms of in-flight entertainment and connectivity (IFEC) in the coming years at the Aircraft Interiors Expo in Hamburg – so what did 2017 bring?

As the week kicked off with the Passenger Experience Conference, we heard from Dick Powell, a founder of design firm Seymourpowell, about the rise of the meta-product – something that comprises hardware, software and a service.

From the news at AIX, this is already something the aviation industry has taken into account.

For example, it’s clear the trend towards wireless IFE (W-IFE) is set to continue, and it’s not just being utilised by low-cost carriers. Thomas Cook Group Airlines announced plans to install the PaxLife solution.

This consists of a Rockwell Collins FFP-2 Server and NGA Wireless Access Points and is designed to allow passengers to access a range of entertainment content and shopping options.

Additionally, Bluebox Wow is set to be deployed across seven aircraft in the Saudi Royal Fleet, part of Saudia Airlines, and Lufthansa Systems signed up a first US customer, Azul, to its BoardConnect portable platform.

The big suppliers are still focusing on offering an holistic range of solutions which make full use of the opportunities provided by ‘the connected aircraft’.  Panasonic Avionics announced its ‘NEXT’ platform at AIX, which will aim to provide airlines with a flexible and scalable solution based on the company’s existing ecosystem of value-added services, tools, applications, and partnerships.

While elements of the ecosystem are already available, Panasonic is aiming to have the complete business model available from 2020. Jon Norris, the company’s senior director of Corporate Sales & Marketing, said it’s responding to the fact airlines are becoming “digital IT systems in the sky.”

The move away from traditional in-seat hardware wasn’t touched on only by Panasonic, but also Rockwell Collins, which confirmed it was exiting the in-seat video marketplace as passengers continue to enjoy streaming to personal electronic devices.

During the show, it was also announced that Panasonic has been selected to provide IFEC for Embraer’s E-Jets E2, which have accrued 275 firm orders to date.

OEM rather than airline agreements were numerous this year. Another case in point:  Carriers ordering Airbus A320 Family, A330, and A380 aircraft can now opt for factory line-fit installation of Gogo's 2Ku global satellite solution, as the company has been officially selected as a lead supplier for its High Bandwidth Connectivity (HBC) programme. 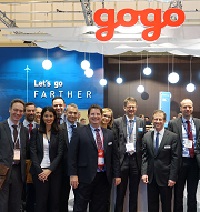 Elsewhere, Inmarsat used AIX to announce it has more than 1,000 expected aircraft under signed contracts, both installed and as a backlog, for its next-generation GX Aviation and European Aviation Network (EAN) IFC services.

Once again, there was an abundance of wearable technology to be seen when walking the floor. Notable news in this area comes from SkyLights, which debuted its Bravo 2nd Gen headset, which allows passengers to watch 3D movies onboard.

It also announced a content partnership with GEE and named Display Interactive as a strategic W-IFE partner to pursue immersive entertainment with wireless streaming capabilities.

GEE itself won a prestigious Crystal Cabin Award in the “Electronic Systems” category for its W-IFE system during the show.

The Onboard Hospitality Awards, which took place as part of WTCE, commended FTS Technologies as one to watch because of the its Flight Butler concept, which arms the crew with wearables to help them to respond more effectively to passenger needs. 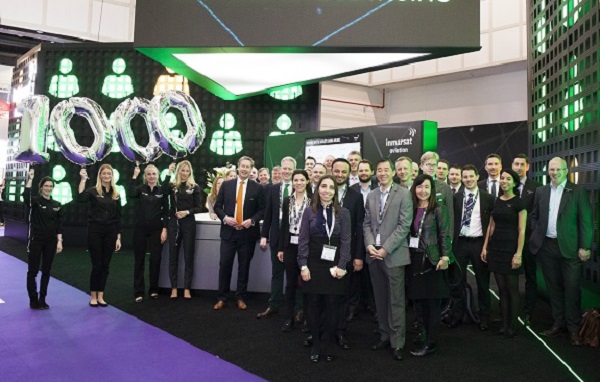