During 2017, London City Airport will be celebrating its 30th anniversary, culminating in the publication of a book commemorating the opening by the Queen on 5 November 1987. 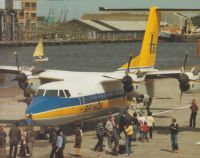 In its first full year, the airport saw just 133,000 passengers passing through. In 2017, it will reach towards 5m and serve more than 30 destinations.  Back in 1988, you could only fly to Paris and Brussels, neither of which is now on the airport's schedule.

Sad to say there appears to be virtually no images of the two landings (27 June 1982 and 30 June 1983) made by a Brymon Airways DHC Dash 7 on Heron Quays, Canary Wharf.  There are some YouTube clips available of the second occasion and the spectacular overfly by the same aircraft (G-BRYC) on 26 May 1986, when Prince Charles laid the foundation stone for the terminal.

BTN editor-in-chief Malcolm Ginsberg would be grateful for any memorabilia of these occasions to be sent to malcolm@ginsberg.co.uk

Back in the early 90\'s I, fand a few other Jersey Travel Agents, we\'re on a day fam trip with British European (now Flybe) from Jersey, with the airlines rep Laura. The day was to familiarise ourselves with the airport, how easy it was to get to the nearby upcoming Canary Wharf, which we did and afternoon tea at the Four Seasons at Canary Wharf we headed back to LCY for the tea time flight. I can\'t remember the reason why now, but we somehow missed the flight and even with just a 15 min check in (which we did) we saw our flight departing from the corridor leading to the gates. This led to British European having to overnight us unexpectedly, where we were accommodated at the Holiday Inn and a fantastic evening at a Chinese restaurant. For many years the agents involved, and the airline rep dined out in this story, as probably one of the best enforced overnight fam trips I\'ve ever been on. We returned to Jersey the following day, with the rep taking no chances, checking in 2hrs prior to the flight. I\'ve used the airport many times since (the approach over the city priceless) but that visit will stand out

The waterbus ran for two years from the Charrington pier to Embankment. The North London Line served the airport from Silvertown (later Silvertown for London City Airport, 100 yards from the terminal) until the line was closed to make way for Crossrail. There is no station planned at the present time.

In July 1988 I flew from AMs to LCY on London City Airways. A year later I took a trip from RTM to LCY with Flexair. After one, or both flights, I than took a short bus ride from LCY to the Thames where I boarded a special ferry for LCY passengers to London. Does anyone know where this ferry exactly started at the Thames and where we were 'unloaded' in London?

As far as I recall there was no public transport and road access was far from easy. Silvertown Station on the North London Line was about 100 yards away and it was renamed Silvertown for London City Airport. Crossrail follows the same track line but there is no station.

Am I right in recalling that there was no public transport when the airport opened? "One" was either rich enough to take a taxi or one's business was not wanted.