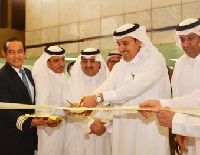 It is the fifth new direct international destination since last year after the Maldives, Ankara, Algeria and Munich.  The route is also the airline’s shortest international sector at 317km (197mi) and is being flown six times a week by 132-seat A320s based at the South Terminal of King Abdulaziz International Airport in Jeddah.

Saudia director-general Saleh bin Nasir Al-Jaser said: “Saudi Airlines is expanding by launching new destinations and new stations, through increasing the number of seats for local flights and many other related developments.”

Saudi Arabia’s ambassador to Sudan, Ali Hassan Jafer, told Arab News: “Having this new line symbolises a new achievement for the relationship between the two countries and will also contribute in increasing the industry and marketing between both.”