Blue Air on Friday officially launched its latest European base at Liverpool John Lennon Airport (LPL) with a morning of celebrations, including a short familiarisation flight for more than 100 guests in attendance.

Liverpool is now Blue Air’s eighth European base and one of the airline’s 189-seat Boeing 737-800 aircraft was flown to Liverpool to be based there to operate new routes from this week to Rome, Milan, Hamburg and Alicante. An eighth route, with twice weekly flights to Larnaca, also begins this month.

As part of plans to become “Liverpool’s airline”, Blue Air launched a competition for the public to design a new livery for the aircraft, with the winning design revealed earlier this month (BTN 6 March).

Airport CEO Andrew Cornish said: “Today has been a tremendous occasion. Blue Air is one of Europe’s fastest growing airlines and continues to go from strength to strength. This new base is a significant financial investment and Blue Air’s commitment to the city region is clear for all to see.”

Gheorghe Racaru, CEO of Blue Air, commented: “Our B737-800 will connect Liverpool to the currently unserved Rome, Milan and Hamburg, while also offering an increased offer on the Alicante sector." 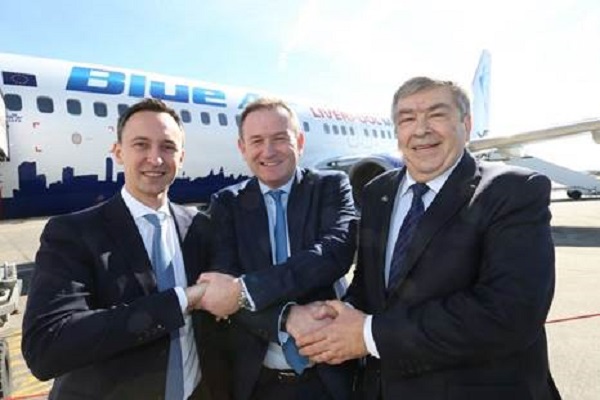 As one of the invited guests on board, I congratulate Blue Air and LJLA for establishing this new base which will be welcomed by all at this easy to use airport.