John Burke, who travels worldwide, has covered the Business Travel Show since it began for several British daily papers besides publishing acclaimed articles on security abroad. He took most of the pictures too. 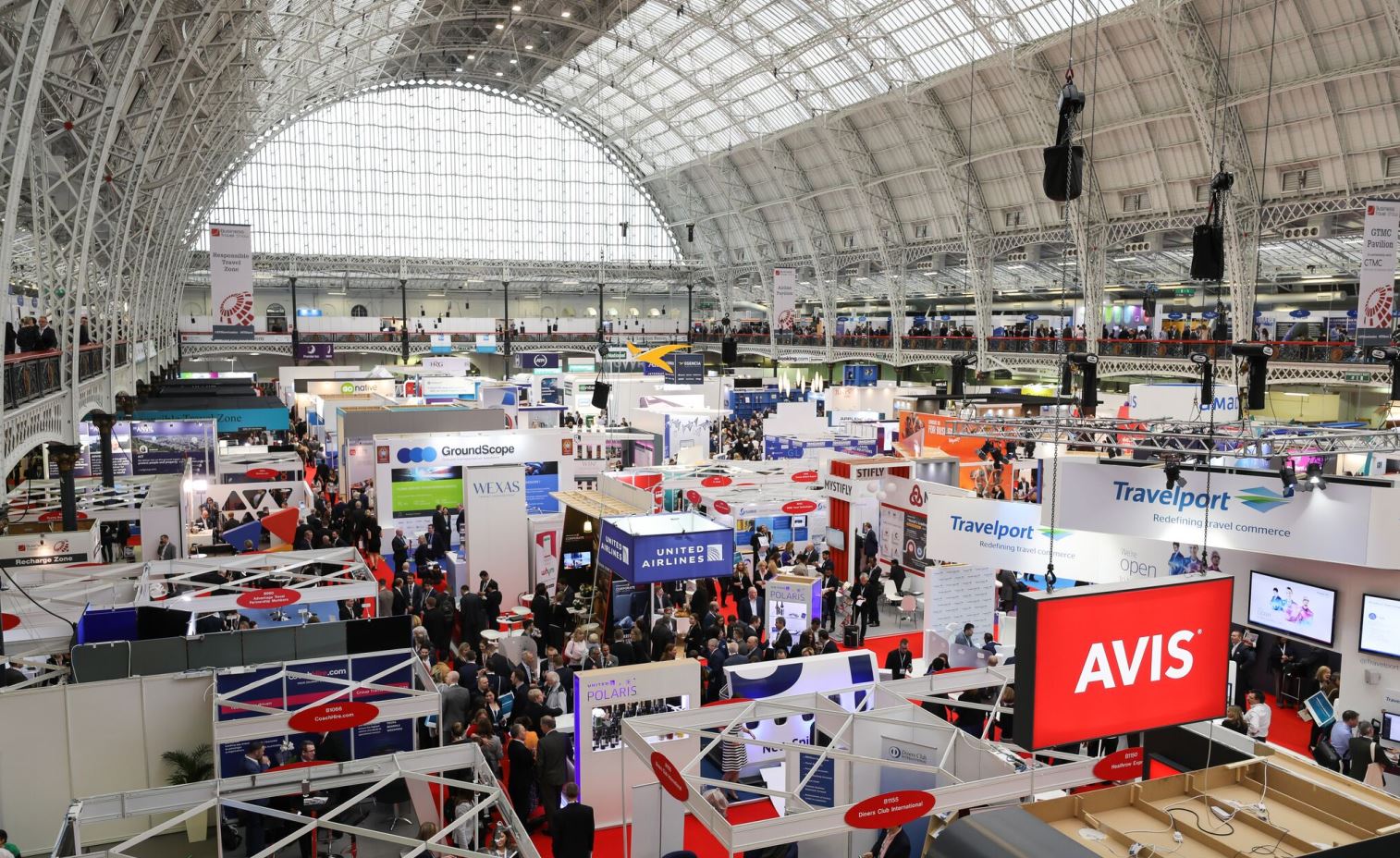 Last week’s Business Travel Show (BTS) at London’s Olympia continued to demonstrate that the field offers ever more bewildering opportunities, especially as Brexit looks likely to increase passengers on long-haul out of London.

The event moves to the larger West Hall in 2018 but for this year BTS had 260 exhibitors, ranging from corporate card providers to venue services on the main floor, with on the gallery Travel Technology Europe listing 151 stands of software and technical knowhow and an array of worldwide participants.

Hogg Robinson Group displayed a new reporting suite and updates to online booking tools and travellers’ apps. FCM Travel Solutions used the show to unveil its Smart Assistant for Mobile (SAM) whose chatbot is regarded by Flight Centre Corporate as a breakthrough.

GoSecure from Wings Travel Management was also among at least 74 new products or projects introduced at this year’s show.  Another example was streamlined billing offered jointly to smaller companies by Avis and Diners Club.

Some 48 airlines were represented including Britain’s largest, EasyJet, and third biggest, Flybe, with new chief executive Christine Ourmières-Widener on hand to meet customers.   Bliss Jet promoted the first shared private flights between Stansted and New York’s LaGuardia Airport, much nearer the downtown areas than either Kennedy or Newark.

Star Alliance had a prominent stand bringing in most of their London operating airlines.  United chose to mount their own stand, showing in London for the first time the brand new Polaris Business Class product.  We will not see it on the North Atlantic until much later in the year but it is very spacious with isle access for all passengers. The Airline Pavilion provided space for non-aligned carriers.

Birmingham and London City airports once again found the show worthwhile with stands and another prominent exhibiter was Priority Pass, the airport lounge access provider. On the train front Heathrow Express, Virgin with a common stand for both West and East coast lines, GWR and Deutsche Bahn all were to be seen promoting their services.  Perhaps next year the Elizabeth Line (Crossrail).  It will not be far away.  Evolvi Rail Systems demonstrated a tool to offset steeply rising fares.

There was a large accommodation sector, including 33 individual hotels or chains, six of which also marketed venue facilities, and 31 owners of serviced apartments, including Staycity that expanded out of Dublin.  Bernard Kerkhof of BBF Serviced Apartments in Brussels said: “Travellers now feel safer on such premises”.  One could argue “where does serviced accommodation becomes an hotel?”  SACO have been around for over 18 years and their recent opening at London’s Aldgate East, called Leman Locke, is purpose-built with 168 studios and one bedroom suites, 2 sky meeting rooms on floors 21 and 22, a Locke Gym, and a selection of forward-thinking all day dining spaces on the ground and first floors. Prices are from £130 per night.  Sales director Ben Harper had a spell at British Airways and says the sector is booming. “Eden Locke is our latest project, on George Street in the heart of central Edinburgh.  It will open in June and will offer a choice of 72 studios and suites with signature views onto George Street and across Edinburgh rooftops to the Firth of Forth".

Strategic sourcing of rooms was among the subjects in the programme of conferences that were well attended. There were 60 sessions whose agenda ranged from payment methods to handling data and from personalised service to carrier agreements.  Key phrases included “technological disruption”, “FinTech”, “app fatigue” and “Wild West Web”, with many attendees complaining that the endless and accelerated updates were too much to cope with.

For many exhibitors, however, the main thing was renewing old friendships and winning new clients.  Kate Bragan of American Express events said: “We have doubled our appointments this year.”  Another veteran exhibitor was the London Chamber of Commerce whose Josie Rogers said: “We come here to raise our profile, and get new members.”

Among the 7,700 estimated visitors, Audrey Muir, a buyer with Baillie Gifford said: “This event offers high quality”, while Bibi de Vetter from Amsterdam said: “I have also found interest in supplying group travel in the social field”.

Best Western produced an interesting and amusing survey of travellers’ likes (such as a bed to oneself) and dislikes, but the most vital information was in the 80 pages of Security Threat 2017 from red24, recently merged with iJet.  Health and safety for employees going places have now become a dominant issue, along with the attendant legal, insuring and medical implications.

KDS is into tracking employees, but it is significant that its representative could not provide the date and place of its next all-round workshop after omitting the last annual one in Paris.  A total of 14 companies in either risk management or corporate security exhibited, including Maiden Voyage that specialises in female travellers.  Some medical advisers were located in the Responsible Travel Zone.

A regular now at BTS Barclaycard the second day of the show coincided with the announcement of the annual results and pre-tax profits nearly tripled to £3.2bn.  Chief Executive Jes Staley said that Barclays is “just months” away from completing its restructuring and that 2016 was a year of “strong progress”.  Business travel is a small but significant element of the business the banker strongly promoting its virtual card which it says cuts the cost of making booking and now is available in 107 countries and nine major currencies.

Initial unaudited figures indicate a 3% increase in attendees for BTS 2017. This is the fourth consecutive year that visitor numbers have risen for the event, now in its 23rd year.  Early results also show that at least 428 hosted buyers from throughout Europe attended the event, up from 399 in 2016 – a gain of 7%.

Of the 260 companies exhibiting in 2017 more than 60 were first timers.  Around 70% of exhibitors have already rebooked their stands for 2018, many of whom will return with a significantly larger exhibition presence.