Europe’s airports reflected the surging aviation scene last year by welcoming a record 2bn passengers. Dublin was ranked the fastest-growing major facility, with Schiphol taking the crown for the most growth. 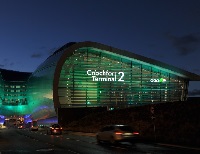 New figures from the trade association ACI Europe showed Dublin recording an 11.5% rise in passenger numbers in 2016, followed by Barcelona’s El Prat with 11.2% and Schiphol with 9.2%.

Copenhagen and Madrid’s Barajas completed the top five fastest-growing major airports after recording 9.1% and 7.7% rises in passenger numbers. Major airports are those attracting more than 25m passengers a year; Dublin recorded almost 28m, 2.8m up on 2015.

The passenger growth at Dublin airport was aided by the launch of 19 new routes last year, while additional capacity was added on 31 existing services.

At Schiphol, the number of passengers travelling through increased by 9.2% to almost 64m, beating Frankfurt and Istanbul and taking the third spot on the list of Europe's busiest airports.