It is likely to be a very "interesting" first gathering of 2017 for London’s Aviation Club next Thursday (9 February). 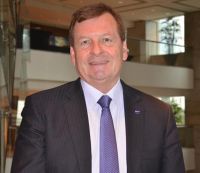 He is bound to face questions following IAG’s CEO Willie Walsh saying at AOA late last year that he “did not think the worldwide alliances would be with us in 10 years’ time”. There is now speculation that following news last week of deeper links between Etihad and Lufthansa, the Gulf carrier could end up joining its German partner in the latter’s Star Alliance.

Etihad is just one of nine of the world’s 50 biggest airlines that has not yet signed up to one of the global groupings. Its Gulf competitor Qatar Airways is a oneworld member.

Another non “club” member is Emirates, which has a close relationship with oneworld’s Qantas. How will that work out?

Since oneworld and the other global alliances first appeared some two decades ago, they have grown to the extent that their members now account for two-thirds of total global capacity and revenues.

Lunch and membership details for the Aviation Club can be found on  https://aviationclub.org.uk.