Size is all for Qantas

The ever-changing view at Los Angeles International Airport (LAX) as the facility pursues its modernisation programme has a new landmark with the opening last week by Qantas of a giant new hangar.

The $30m maintenance and engineering facility is one of the largest commercial hangars in North America and the first designed specifically to accommodate the Airbus A380.

The new building has enabled Qantas to consolidate its property footprint in Los Angeles, with 40 corporate employees moving into new offices in the hangar and joining the team of local engineers.

With 50% more space than Qantas’ previous hangar, also used to maintain A380s and B747s, it has the capacity for four aircraft to be worked on simultaneously, cutting the time for maintenance by about 20% and meaning Qantas could also earn millions maintaining other carriers’ fleets.

The 613,543sq ft (57,000sq m) facility will be used for maintenance checks on Qantas’ A380 and Boeing 747 aircraft during ground time in Los Angeles. It  also has capacity to support Qantas’ new B787-9 Dreamliner when it enters service this year.

Qantas’ previous hangar, built in 1958, was demolished to make way for the airport improvement programme, including the Midfield Satellite Concourse addition to the Tom Bradley International Terminal. 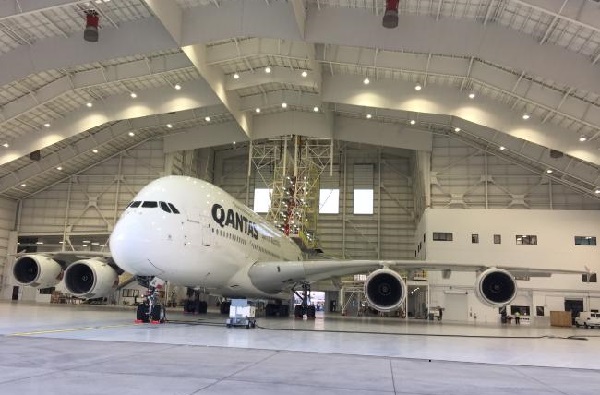