Seatback video screens will be scrapped on American Airlines’ new B737 MAX fleet after the carrier said almost all passengers now bring aboard their own devices such as mobile phones, tablets and laptops that do the same job. 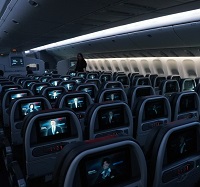 Satellite-based systems had also improved on-board internet speed and access, which will enhance the viewing experience, American said. "Phones and tablets are continually upgraded, easy to use and the technology our customers have chosen."

The airline, which receives the first four of its 100 MAX aircraft this year, said it had not been decided whether to extend the policy to other new aircraft but video screens would remain on international flights and the three-class Airbus A321T.

American pointed out that films and television shows in American’s on-board library and live television could be viewed on devices free, while satellite connections to use the internet, text or access on-demand video will be available for a fee at boarding gates.

The airline is planning to have satellite-based wi-fi on half its single-aisle fleet by the summer of 2018, with full installation by the end of 2019. Half the domestic narrow-body fleet will have power at every seat by the end of 2018, it said.