Already recognised as one of the fastest-growing carriers, Ethiopian Airlines, which took delivery last June of Africa’s first A350 XWB, is adding seven new destinations over the next six months in what it says will make 2017 probably a record year of new cities served out of Addis Ababa. 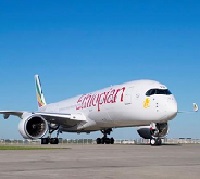 Between the start of next month and the end of June, Ethiopian is launching service to Victoria Falls (Zimbabwe), Antananarivo (Madagascar), Conakry (Guinea), Oslo, Chengdu, Jakarta and Singapore, taking its network total to 98 international cities.

CEO Tewolde Gebremariam said: “Africa’s share of the global aviation market is the smallest, at around 3%. As the largest airline group in the continent, we are concerned about the low base of air connectivity and we are undertaking record expansion to deal with that.

He said beyond the economic slowdown, especially in the oil export-dependent economies of Africa, Ethiopian firmly believed the continent would become the magnet for foreign direct investment, trade and tourism, which were “the engines of air travel growth”.