Pioneering pilot Amy Johnson is to become the second British hero honoured on a Norwegian tailfin, with her portrait set to appear on two aircraft, a B737 and a Dreamliner, on routes between the UK, Europe and the US later this year. 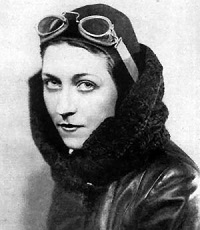 The airline has a history of commemorating famous figures and has more than 80 'tail fin' heroes who it says symbolise the spirit of Norwegian through innovation, challenging the norm and inspiring others.

The company has now begun a series featuring British heroes to reflect the airline’s rapid growth in the UK, where it now flies 4.5m UK passengers each year to 50 destinations.

Johnson will become the second British figure to feature following last year’s announcement that Roald Dahl, dubbed the world’s number one storyteller, would be the first.

Born in Hull in 1903, Johnson was the first woman to fly solo from England to Australia. She did it in 1930, one year after being awarded her pilot’s licence. The aircraft was an open cockpit single-engine Gypsy Moth which she named Jason.

She was killed in January 1941 while flying an Airspeed Oxford from Prestwick to RAF Kidlington after apparently going off course and bailing out into the Thames Estuary.