An innovative system that allows an aircraft to taxi backward and forward using small electric motors in its nosewheels rather than jet engines or a tow tug has taken a major step to being able to enter general use. 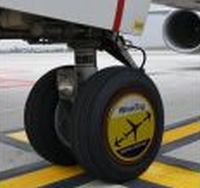 The Oregon-based WheelTug company said last week the US Federal Aviation Administration (FAA) had accepted the certification plans for its aircraft electric drive system for the Boeing 737NG.

WheelTug says the system will benefit airlines by “well over” $1m per aircraft per year, reduce fuel consumption and emissions at airports, and save up to 20min in ground time between flights.

WheelTug will also enable aircraft to parallel park at terminal gates, the company says, which means airlines can use two doors for narrow-body boarding and deplaning, allowing for quicker operation.

In a statement, the company added: “The WheelTug system represents the most significant improvement in aircraft ground handling in decades, allowing airlines to reduce overall time on the ground.”

Entry into service for the B737NG family is expected in late 2018, with versions for other aircraft types planned. WheelTug's order book so far totals almost 1,000 systems for aircraft from 22 airlines worldwide.