New routes including a new service between London and Xi’an and further expansion for 2017 have been announced by expanding Chinese carrier Tianjn Airlines. 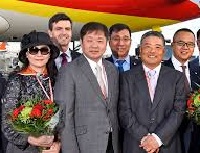 First will be new flights from Tianjin to Auckland, New Zealand, via Chongqing, starting next month. With a flight time of 13hr 30min, the service will operate on Tuesdays, Thursdays and Saturdays using an A330-200 with 18 Business Class and 242 Economy Class seats.

The new route between London and Xi'an, the capital of Shanxi province and home to the Terracotta Army, begins next May, also utilising the A330-200 aircraft with the same configuration. Flight time to Xi'an is around 10hr and the aircraft will then continue to Tianijn.

UK general manager Robert Chen said: “We’re delighted to announce yet more new services for British travellers following the hugely-successful launch of our first flights from Gatwick to Tianjin and Chongqing. Next year is going to be a very exciting one for us.”