All change with UK airlines

Saad Hammad, CEO, unexpectedly stood down at Flybe last week with the airline due to publish its quarterly results on Wednesday 9 November. No immediate replacement has been announced, with the rumour circulating of a personality clash with chairman Simon Laffin, the former land director of Safeway Supermarkets. 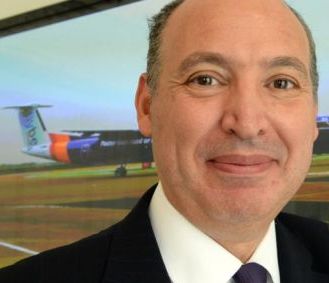 Laffin, who now has an executive role, sits on the boards of a number of non-airline/travel companies. Flybe shares are at a rock-bottom 37p, having been issued at 295p and once topping 341p. The airline currently has a market cap of around £80m.

Also on the move is Warwick Brady from easyJet, who has been succeeded as chief operating officer by Chris Browne, formerly chief operating officer of TUI Airlines and currently a non-executive director of easyJet plc.  Browne is stepping down from that role. Peter Duffy, an easyJet stalwart and previously marketing director, becomes chief commercial officer.

CityJet, which these days is much into wet-leasing (flying its aircraft in the colours of other airlines), is not denying rumours emerging from Dublin of negotiations with the Stobart Group for the control of the transport infrastructure company's airline interests. This is unlikely to be completed until early in the new year. CityJet has confirmed operations out of the Stobart-owned Southend Airport from summer 2017.
www.easyjet.com     www.cityjet.com
www.southendairport.com     www.flybe.com