Ryanair and the London runways

Michael O’Leary, aided as usual by Ryanair's marketing director Kenny Jacob, was in his usual feisty combative mood when he introduced his airline's 2017 flight programme in London last week. Claiming to be first with next year’s flights, the real aim of the launch is to begin to bring in money for something that for many will not happen for months. It is a long time since airlines were in the credit business. 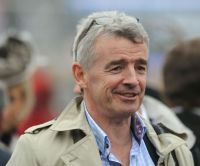 His main emphasis was post-Davies.

“We call on the new UK government to be radical in its decision-making on new runways for London instead of picking just one,” he said. “Theresa May should approve three new runways – one each at Heathrow, Gatwick and Stansted, which will finally resolve the runway capacity issue for the next 50 years, while ensuring competition between airports delivers efficient facilities and prevents airlines and passengers being ripped off by gold-plated monopoly runways.”

While admitting that growth at Stansted will be minimal, in fact the airline is cutting back this winter, and when pressed he had to admit it was apron space that was causing trouble at that airport. “Slots at peak times are a problem,” he said.

Ryanair represents 80% of Stansted's business. Strasbourg is new this winter while Faro is added at Luton.