Air France yesterday (Sunday) cancelled around 20% of its flights but operated the rest as it juggled schedules on the fifth day of a week-long strike called by cabin crew. The airline said it managed a similar level of service on Saturday. 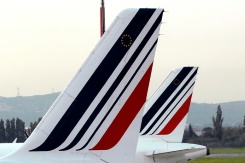 The company warned that last-minute cancellations and delays could not be ruled out and "difficulties with the composition of the crews could also lead to limits on the number of passengers per flight”.

France’s industrial-relations turmoil caught up with the national carrier on Wednesday when the walk-out began. Air France said initially it was having to cancel nearly a third of domestic and medium-haul flights and some 8% of services to long-haul destinations.

Observers said 37% of cabin crew had responded to the strike, which is over the renewal of a deal which expires in October on rules, pay and promotion. The airline wants the extension to run for 17 months while unions are demanding three to five years.

Air France is updating its flight schedules each evening for the following day and contacting passengers affected. It is offering passengers the opportunity to postpone their flights at no extra cost or cancel with a full refund.