In a further reaction to the Brexit vote, Ryanair chief Michael O’Leary said last week the airline would cut capacity and frequency of services from Stansted and “pivot” growth away from the UK in favour of European routes over the next two years.  Ryanair has 40 of its total fleet of 350 aircraft based at Stansted, which is its biggest airport base. 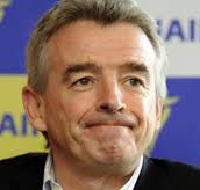 Reporting first-quarter financial results, the carrier said it would not close any of the routes but was “rethinking its operations against a backdrop of heightened political and economic uncertainty triggered by the UK’s decision to quit the EU”.

Describing the Brexit vote as “a surprise and a disappointment”, Ryanair CEO Michael O’Leary said the uncertainty it had triggered “will be damaging to economic growth and consumer confidence”.

He added: “We will respond as always with our load factor active/yield passive strategy.”

O'Leary noted the “modest” profit increase was in line with previous guidance.

I am sick and tired of reading the thoughts of Chairman O’Leary and First Lady McCall on Brexit. Do they really believe think that anyone cares what they think? The majority of people who voted to leave the EU are working class; the people who ‘need’ low cost flights to take their foreign vacations. They knew what they were doing – Ryanair and easyJet’s contribution to Project Fear saw to that. And Mr O’Leary in particular needs to recognise that his airline isn’t the only show in town any longer.