Britain’s new secretary of state for transport was named by prime minister Theresa May on Thursday as Chris Grayling, 54, the long-standing MP for Epson and Ewell and a champion of Brexit. Yesterday he said he wanted to move quickly on a decision on airport expansion. 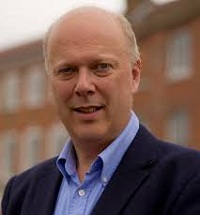 Grayling succeeds Patrick McLoughlin and inherits a brief that includes overseeing the expansion of either Heathrow or Gatwick and the future of the HS2 rail project.

His new deputy was confirmed on Saturday as Lincolnshire MP John Hayes, who represents South Holland and the Deepings and becomes minister for transport.

In his first public comments yesterday, Grayling told the BBC's The World This Weekend he wanted to "move rapidly with a decision on what happens on airport capacity".

He added: "We (the government) have a quasi-judicial role, so I'm not going to say whether I prefer Gatwick or Heathrow, there's two options at Heathrow. I'm going  to look at this very carefully in the coming weeks."

Grayling also said he did not intend to scrap the HS2 rail project. "I have no plans to back away," he added.

Grayling’s appointment was announced just a day after the annual Aviation Reception part-sponsored by the Airport Operators Association at the House of Commons (see this issue).

After the announcement, AOA chief executive Darren Caplan congratulated the new secretary of state, and reinforced his remarks of the day before on the need for decisive action.

“It is crucial that business as usual continues while we develop a new relationship with the EU,” Caplan said. “In particular, (he) needs to make a decision on airport expansion as soon as possible, demonstrating the world the UK is open for business.

“He will also need to ensure his department updates the 2013 Aviation Policy Framework, to ensure we make better use of existing airport capacity around the UK so that all airports that wish to grow can do so, for the benefit of UK, its economy and connectivity.”