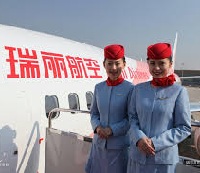 Ruili first announced it intended to buy the aircraft – the first wide-body order for the Yunnan-based carrier – in May at the ceremony for the airline's two-year anniversary.

Chairman Ma Zhanwei said Yunnan was the ideal base from which to create a gateway between south-west China and the rest of the world. The 787-9’s size, long range, competitive fuel efficiency and passenger appeal made it “an ideal fit” in facilitating the airline’s international expansion plans, he added.

Established in February 2014, Ruili operates a fleet of nine B737s on 16 domestic routes, with 46 daily departures. Its first service, between Kunming and Mang City, was launched on 18 May 2014.