Virgin Atlantic and Airbus set the tone for this year’s Farnborough last week with an eve-of-show US$4.4bn (£3.3bn) firm order for 12 Airbus A350-1000s, a deal welcomed in one of his last public statements as prime minister by David Cameron.

The order is part of a fleet-modernisation programme that will see 50% of Virgin’s aircraft replaced in a six-year period, creating one of the world’s youngest fleets.

Boeing said the A350-1000, powered by Rolls-Royce Trent XWB engines, continued Virgin’s investment in a greener, cleaner, quieter fleet with an aircraft designed to be 30% more fuel and carbon efficient than those it replaces.

The Airbus model is also expected to reduce the airline’s noise footprint at its airports by more than half.

David Cameron said: "As well as being good news for passengers, it's great news for jobs in the UK – the fantastic Airbus A350 is part-built in the UK with Rolls-Royce engines and other suppliers across the country.

“It's an investment in the UK itself, and our world-beating aerospace industry." 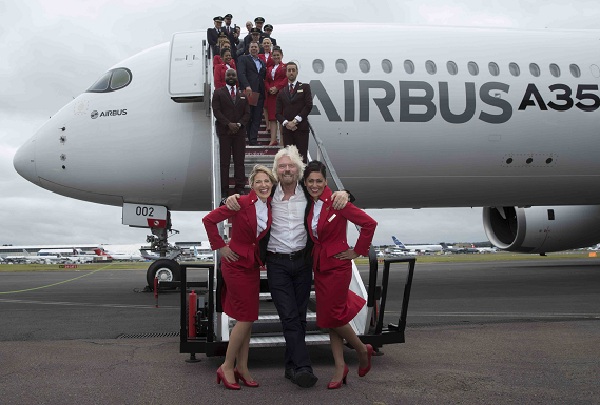